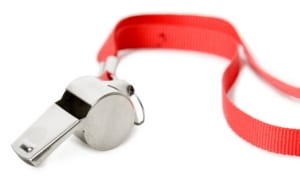 The recent case of Bilsbrough v Berry Marketing Services dealt with an interesting point – if an employee or worker hasn’t actually made a whistleblowing disclosure, but is preparing to do so, or if the employer wrongly thinks they have blown the whistle, are they still protected?

Under a strict reading of the relevant legislation, protection only applies “on the ground that the employee has made the protected disclosure”, i.e. the disclosure has to have actually been made.

In the Bilsbrough case, the allegations related to two situations; one was a disclosure that had actually been made, and the other was a situation where the employee had been researching how to make a disclosure (in this case to the Information Commissioner) but had not actually done so. Was he protected in relation to the potential disclosure?

As a result, the Tribunal found that the potential disclosure did give the employee protection:

“In a case such as this, if an employee does not know how to make a disclosure to a regulator, he or she will have no option but to research how to do so. If such research is discovered before the disclosure is made and an employee can legitimately be subjected to a detriment or dismissed as a result, then the ability to make a protected disclosure is greatly diminished.

The same would apply in respect of an employee who looked into making a protected disclosure but then decided, for whatever reason not to do so. If a person cannot consider making a disclosure without the risk of sanction, even if that consideration leads to a decision not to make a disclosure, then there will be a chilling effect on the making of protective disclosures…

It seems to us that the ability to find out how to make a public interest disclosure and to consider whether or not to make it, is an integral part of making it.”

It is important to point out that this decision is Employment Tribunal level only, and therefore other Employment Tribunals are not obliged to follow it. The case may well be appealed to the Employment Appeal Tribunal, and it will be interesting to see whether the decision is upheld there. We will of course keep you updated on that in our future ebulletins.

Although some people may feel that this decision goes too far, it is worth bearing in mind the equivalent position under discrimination law regarding victimisation. The Equality Act specifically gives protection against victimisation not only where the employee has done a ‘protected act’ (such as making an allegation of discrimination) but also where the employer believes that the employee ‘has done, or may do, a protected act’.

If the Bilsbrough case does become binding law, then it would widen whistleblowing protection significantly. Often those who ‘blow the whistle’ do so confidentially or anonymously, but within many workplaces there are often rumours or speculation about who the likely whistleblower could be. To try and avoid potential claims in your organisation, it would be worth ensuring that your policies and procedures are up to date and also that managers are trained on how to deal with whistleblowing situations. We can help with both of these – do get in touch if you would like to discuss it further.

If you are dealing with a whistleblowing issue, then we can help. Please call us on 01243 836840 for a no obligation chat, or email us at [email protected].