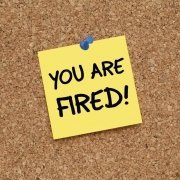 The Supreme Court recently considered the question of when notice of termination given to an employee takes effect. Is it when the notice was sent, when it was delivered to the employee’s address, or when the employee had a reasonable opportunity to read it? This was the question before them in Newcastle upon Tyne NHS Foundation Trust v Haywood (2018).

On the face of it, the difference could only be about a week – and usually it is hardly worth either party taking the matter to the Supreme Court for the sake of a week’s pay! However, Mrs Haywood turned 50 on 20 July 2011, and if she was aged over 50 on the date her employment terminated she would be entitled to a much more generous pension.

The Supreme Court held that the notice of termination was effective only when the notice had been delivered, and the employee had a reasonable opportunity to read it, so in this case on Mrs Haywood’s return from holiday on 27 April 2011. This is consistent with earlier decisions on the same point.

This situation does, however, leave employers with a problem in situations when they cannot contact the employee. Over the years we have advised on a number of occasions when employees have simply disappeared – quite often they have gone on holiday to their home country, and simply not returned or left a forwarding address. The employee often considers that they have left that employment, but that is not strictly right. Employers sometimes try to argue that the employee has “constructively resigned” by not attending work or keeping in touch, but the courts have rejected this approach. In law, they remain employees until such time as their employment is terminated, either by their resignation, or by the employer dismissing. In practical terms this will normally not be an issue as the employee never returns, but in theory they would still be employed and entitled to accrue holiday etc. and employers understandably want to avoid being left in limbo.

The rule that notice is only served when it is delivered and the employee has a reasonable opportunity to read it can also be used to advantage. Some years ago, I was advising a senior employee who was entitled to a bonus of about $250,000 after he had completed 1 year’s employment. He was concerned that his American employers would try to avoid paying this by dismissing him just before the year was up. The anniversary of his employment fell on a Sunday, and he was convinced that his employer would email him to dismiss him over the weekend. This was in the halcyon days when mobile phones were simply phones and did not receive emails, and I advised him not to log on to his emails over the weekend as he was not working. He took my advice. He the logged in on the Monday, and sure enough there was an email which had been sent late on Friday (our time) purporting to terminate his employment with immediate effect. We successfully argued that the notice was only valid from the Monday and eventually his employer conceded and paid him his bonus.

The question of when notice was served may seem a bit of an academic point, but it can be very significant in its effect. If employers want more certainty, then they can put a provision in their contracts of employment which state when notice is deemed to be served, but there is no certainty that these would stand up to challenge if the employee did not actually receive and read the notice.