Do we need to hold a separate investigation meeting? 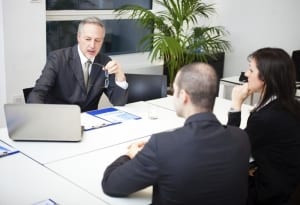 We have a situation involving some quite serious disciplinary allegations against an employee which could lead to dismissal. He is away from work at the moment and in his absence, statements have been taken from other witnesses about what happened. Are we required to discuss the allegations with him at an investigation meeting first of all, or can we move to a disciplinary hearing and give him the opportunity to comment on the allegations there?

In general, there is no legal requirement to conduct a separate investigation meeting. It is not mentioned in the Employment Rights Act, nor is it something which is required by the ACAS Code of Practice on Disciplinary and Grievance procedures (which are a non-statutory guide to the procedures an employer should follow). The ACAS Code explains that employers should carry out a reasonable investigation in the circumstances, but that will not necessarily always require a specific investigatory meeting with the employee.

This issue was dealt with by the Employment Appeal Tribunal in the recent case of Sunshine Hotel v Goddard. The Claimant had been dismissed for sleeping on duty, and brought a claim of unfair dismissal. The Employment Tribunal had concluded that the Claimant’s dismissal was unfair, partly on the basis that the employer had not held an investigatory meeting, something that the Tribunal had referred to in its decision as a “basic employment right.”

The Employment Appeal Tribunal considered the grounds for appeal and clarified that there is no legal requirement for a separate investigation hearing. However, in the circumstances of the case, it was found to have been reasonable for the Tribunal to conclude that there had been insufficient investigation. Therefore the appeal was rejected and the decision that the Claimant was unfairly dismissed was allowed to stand.

However, despite this, there are some situations where a separate investigation meeting must be held. The main one for employers to be aware of is that you will need to hold one if your disciplinary procedure requires it. If this is stated in your procedure and you do not follow it, an Employment Tribunal would be highly likely to find the dismissal unfair. For this reason, it is always best to ensure that your procedure gives you the flexibility to hold an investigation meeting if you want to, but doesn’t require you to hold one if you feel the situation does not warrant it.

There will also be situations, particularly in more complex cases, where realistically you cannot carry out a proper investigation until you have established the employee’s version of events. If so, then it would be best to have an investigatory meeting first of all, so that the scope of the investigation can be properly established and the investigation can be completed before the disciplinary hearing takes place. Otherwise, you make it more likely that the employee’s points will come up at the disciplinary hearing, which would mean that process would need to be adjourned while the further investigation takes place.