Did sending an employee a 50th birthday card amount to discrimination? 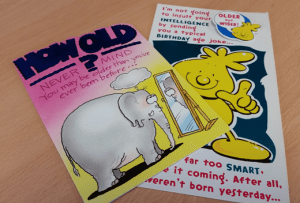 When age discrimination first came in during 2006, there were reports that it would be unlawful to send a colleague a birthday card as this would be ageist, and it was reported that at least one local authority banned birthday cards between colleagues. Had the world gone completely mad?

Fortunately not entirely, according to the Employment Tribunal’s decision in the case of Munro v Sampson Coward LLP. A legal secretary, Miss Munro, had objected when another secretary, aged 52, said to her “it was your 50th birthday wasn’t it? – you can’t hide it you know”, and subsequently the firm sent her a birthday card. A couple of days later Miss Munro wrote a letter of complaint to one of the partners claiming that she had felt humiliated and shocked by the unsolicited comments and that she wanted to keep her private life out of the workplace.

A month or so later, the firm decided that they needed to take disciplinary action against Miss Munro because of long running performance issues. When these commenced, Miss Munro denied there were any performance issues and alleged that she was being targeted because of her age, and she argued that the comments about her age and the birthday card supported this. She also alleged whistleblowing, alleging that her complaint about the birthday comments had been handled in breach of data protection legislation.

The Employment Tribunal held that Miss Munro’s “sensitivity about her age appeared unusual and extreme” and there was insufficient evidence to show that other members of staff who were over 50 would have been treated differently. It added that the comment to her from the other secretary was “trivial and had not been delivered maliciously’”and that “the birthday card was intended for the claimant as an act of kindness” by her employer. The Tribunal added: “We concluded that the claimant was wrong to have artificially attempted to cloak herself with the protection afforded by the whistleblowing legislation by making disclosures which had not been public interest.”

The case is Employment Tribunal level only, so isn’t binding on other Tribunals, but nevertheless it is nice to see a robust common sense approach being taken. On the face of it it would seem to have been an extraordinary decision if Miss Munro had succeeded!

If you are an employer dealing with a discrimination allegation, then we can help. Please call us on 01243 836840 for a no obligation chat, or email us at [email protected].