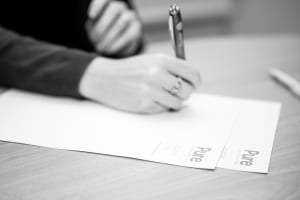 The team at Pure Employment Law was recently instructed by an employer who had reason to suspect that one of its long-serving part-time employees was doing work for a competing organisation. This had potential to be very damaging to the client’s business, but they knew that the situation needed to be properly investigated before any action could be taken.

The matter is of course confidential, so we have anonymised and changed some of the key information here.

As the allegation involved a senior member of staff, there were not many people in the organisation above them who could deal with an investigation. In addition, the client needed to be careful to ensure that separate people within the organisation would be able to conduct any potential disciplinary and appeal hearings, if matters got that far. The client therefore instructed Nicola Brown to carry out the investigation into the allegations. Nicola is experienced at conducting investigations into many different kinds of issues, including urgent disciplinary and grievance matters as well as other sensitive allegations such as whistleblowing.

As she normally would, Nicola started her investigation by obtaining and reading the basic documents involved, including the employee’s contract of employment and job description, the relevant company policies, and the background details and email correspondence regarding how the allegation had first come to light. She then also carried out her own online research into the competing business and the nature of the employee’s alleged role with them, and to what extent that competed with the client’s business.

Due to coronavirus restrictions a face to face meeting was not suitable, so Nicola conducted an investigation meeting with the employee using Zoom. In responding to Nicola’s questions, the employee made some counter-allegations, including that her line managers had known and approved of the other work, so those also had to be investigated by interviewing the relevant managers (also via Zoom).

Preparation of an investigation report

Nicola then produced a comprehensive investigation report for the client, which included a summary of the work undertaken, paginated copies of the relevant documents and evidence, detailed meeting notes of all of the investigatory interviews, and an explanation of what she had found and her conclusions. This was sent to the client in a secure password protected format.

Nicola concluded that based on the evidence there was a case to answer, and therefore that it was that it was a matter which needed to be dealt with under the company’s disciplinary procedure.

The investigation report and the evidence included within it was provided to the employee and formed the mainstay of the information to be relied upon at the disciplinary hearing.

The disciplinary hearing was also conducted using Zoom. The employee was advised of her right to have a companion on the Zoom call with her, but chose to proceed without. The disciplinary panel chose to make a recording rather than having a note-taker in the meeting, and the employee was notified of this in advance. Notes of the hearing were subsequently typed up using the recording.

Although the allegation was considered to be potential gross misconduct, having heard the employee’s representations at the disciplinary hearing, the disciplinary panel decided that on balance, because of some mitigating factors raised by the employee, she should be given another chance, and therefore that they would issue a final written warning rather than dismiss. Peter then assisted the panel with drafting a detailed letter to the employee explaining the outcome, which made clear to her that the competing work would not be permitted in future, and that any further breaches could lead to dismissal. The letter also included details of the employee’s right of appeal.

The client was pleased that the matter had been dealt with quickly, discreetly and professionally, and thanked Nicola and Peter for their support and advice.

If you are an employer in need of assistance with an investigation, then we can help. Please call us on 01243 836840 for a no obligation chat, or email us at [email protected].